CLIVE, Iowa—State Sen. Joni Ernst, R-Red Oak, stopped by the Republican Party of Iowa Victory Headquarters in Urbandale Saturday morning to meet volunteers on the first shift of the day for the Iowa GOP’s weekend of action. She then went to a Clive neighborhood to door knock with volunteers.

Iowa GOP volunteer Peggy Hermann, a grandmother and retired teacher, canvassed with Ernst. Hermann, a Missouri Valley native, has volunteered for GOP campaigns since 1988.”I love Iowa. It’s the best kept secret in the country as far as people and communities,” she said. “That’s why I’m so taken with Joni. I’m a small town girl. She’s genuine, and that really matters.”While door knocking, Ernst happened to ring the doorbell of the Clabaugh family. Michael, a 1995 graduate of Iowa State University and a Stanhope native, told Ernst he went to high school with her daughter while he filled out an absentee ballot request form.

Ernst participated in the Iowa GOP’s Weekend of Action, a post-Labor Day push by the Iowa GOP to engage Republicans and undecided voters to vote early. Radio Iowa reported on the efforts of another volunteer, Trent Wright of Sioux City. Wright operates The Asparagus Guy, a Sioux City-based small business.

“Although I retired from the Air Force, I think the volunteerism that I’m doing now has way bigger impact on the direction of the country,” Wright said during an interview with Radio Iowa Sunday afternoon. “I mean if I turn out a handful of votes for the Senate campaign and it changes the face of the Senate, well that could change the face of the Supreme Court for a long time and that’s a big impact on the country.”

“This is a decentralized effort by hundreds of volunteers to knock on their neighbors’ doors, talk to undecided voters in their communities about the phenomenal Republican ticket and encourage folks to vote early,” said state GOP Chairman Jeff Kaufmann of Wilton in a press release, the Des Moines Register reported. “This is a record, dramatic ramping up of our efforts.”

“This weekend [was] our Weekend of Action,” Kaufmann said. “There will be 30,000 doors knocked on in this state, there will be hundreds of volunteers, and that is the starting gun for the Republicans’ call to action. And what you will find—and I’m choosing my words very carefully here—but what you will find in this next two months is a record-breaking amount of resources and organization and volunteers, record-breaking for Republicans in a midterm election. And for the next two months watch how this unfolds.”

Meanwhile, in a weekend round-up, Iowa GOP rapid response director Jahan Wilcox reports that it has been another bruising week for Bruce Braley: 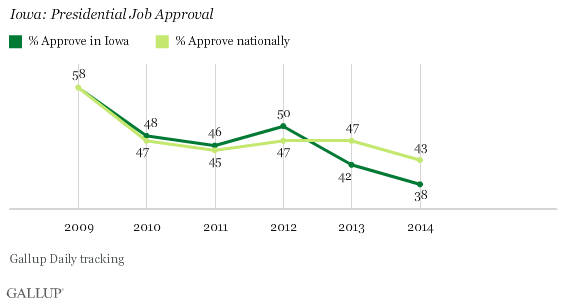 Gallup also notes that Iowa is now less Democratic than the rest of the country. Put simply, Iowa was more Democratic than the rest of the nation in 2008; it is now less Democratic than the rest of the nation.The Washington Post reports that Barack Obama’s poll numbers is bad news for Washington liberal Bruce Braley.
“So, what does this all mean in 2014? It’s bad news for Rep. Bruce Braley, the Democratic nominee for Senate in Iowa. Braley is in a close race against Republican Joni Ernst,” writes political reporter Sean Sullivan. “While the president’s approval rating is hardly the only determining factor in a statewide contest, it can be a significant one. And in Iowa, Obama has gone from Democratic asset to albatross.”The Associated Press reports that Braley continues to come under fire for skipping 75 percent of the Veterans’ Affairs Committee hearings.
Braley has come under fire for missing hearings held by the House Committee on Veterans Affairs in 2011 and 2012.With Democrats disappointed in Braley’s floundering campaign, The Washington Post reports that Republicans remain excited about Joni Ernst.
Democrats initially were very confident that they could hold the seat of retiring Sen.Tom Harkin, but the race has become one of the most competitive in the country because of stumbles by Democratic Rep. Bruce Braley and the enthusiasm among Republican circles for their candidate, state Sen. Joni Ernst.

Despite saying that he wouldn’t raise the Social Security Retirement Age, theDes Moines Register reports that Braley was singing a different tune just a few years ago.
Braley’s campaign denies the congressman supports raising the retirement age, although there’s at least one newspaper article showing he considered it a possibility in the past.

Meanwhile, the Republican Party of Iowa blasted Braley for his hypocrisy on protecting the guaranteed benefit of Social Security.
Despite his misleading attack yesterday, just two years ago Washington liberal Bruce Braley opened the door to ending guaranteed Social Security benefits. During his re-election campaign, Braley said he would look at means testing—which would let the government determine which seniors are eligible for Social Security.

Despite watching Braley’s six-point lead vanish over the summer, the Cedar Rapids Gazette reports that California billionaire Tom Steyer’s NextGen believes their strategy is working.
Although Ernst has closed a 6-percentage-point gap since May and is now tied with Braley, Lehane insisted the strategy is working.

The Sioux City Journal reports that Republicans ripped Braley for his allegiance to Tom Steyer and his anti-ethanol agenda.
NextGen Climate is “giddy” to have Braley in its pocket, Republican Party of Iowa spokesman Jahan Wilcox said. “Iowans should beware that NextGen is bankrolled by billionaire Tom Steyer, who stands against Iowa’s ethanol industry,” he added, referring to anti-ethanol statements by Steyer, a former hedge fund manager who accumulated part of his fortune by investing in fossil fuel projects. “I saw in the paper the other day that Al Gore was saying that maybe he shouldn’t have been for ethanol,” Steyer told Fortune magazine four years ago. “It’s kind of like duh! Did you ever take out your calculator on that one?”

The Washington Free Beacon reports that during the healthcare debate, Nancy Pelosi tapped Braley to give the closing argument for ObamaCare.
Republicans are reminding Iowa voters that Rep. Bruce Braley (D., Iowa) was one of the principal backers of the Affordable Care Act, more commonly known as Obamacare. … Braley delivered one of the last floor speeches in support of the law before it passed.

National Review Online reports that Braley was adamant that he read ObamaCare, which raided $716 billion from Medicare.
Iowa Senate candidate Bruce Braley hasn’t talked up Obamacare much on the campaign trail this year, but in his 2012 congressional campaign, he wanted Iowans to know he stood by every word of the law: “You’re damn right I read the bill,” the congressman told his opponent in a debate. “I had every page highlighted, I had my handwritten notes in the margin and I had tabs there,” he said.

The Republican Party of Iowa noted that every Iowa senior enrolled in Medicare will see a $10,000 cut, due to Braley’s vote for Obamacare.
As the Waterloo Cedar Falls Courier reports: The Republican Party of Iowa also challenged Braley on Tuesday for his support of the Affordable Care Act, which included $716 billion in Medicare cuts. … “Bruce Braley’s Obamacare cuts over $10,000 from every Iowa senior enrolled in Medicare,” RPI Chairman Jeff Kaufmann said, using a 10-year figure. “After ransacking $716 billion from Medicare for Obamacare, why would seniors ever trust Bruce Braley?”

Finally, the Cedar Rapids Gazette reported that Sen. Chuck Grassley, R-Iowa, has traveled back to Iowa three times as much as Sen. Tom Harkin, D-Iowa, during the last three years.
Grassley has returned home at least 99 times, flying coach, according to an analysis of travel records by the Washington Examiner. Harkin returned to Iowa only 33 times—an average of 11 trips per year—sometimes flying on private jets. “It demonstrates the extent to which Grassley is around,” said Chris Larimer, an associate political science professor from the University of Northern Iowa. “He’s in the state talking with Iowans.”