Biden and His Lackey Mike Franken 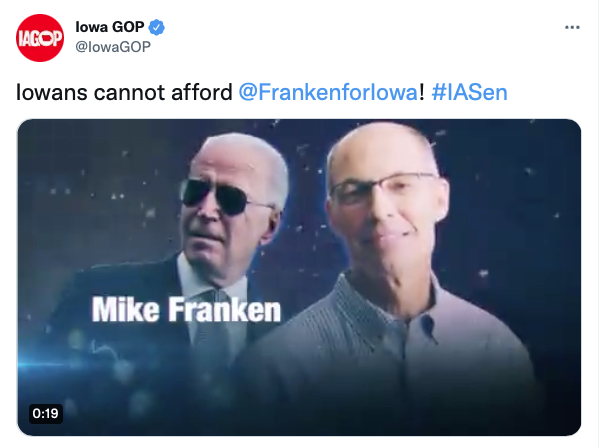 While our economy was tanking, Mike Franken said that Joe Biden is doing a "fabulous job." And now that economy has crumbled, our energy independence is ruined, and our Southern Border is open, Mike Franken has proven he is just another Biden lackey.

Mike Franken is a scandal-ridden candidate, so much so that Chuck Schumer admitted that Franken has no chance of beating Sen. Grassley. That was after Franken was accused by his former campaign manager of sexual assault. Since a police report was made public, more women have confirmed Franken's "1950's" style of interacting with women.

"While our economy is in a recession, Iowans cannot afford to have a Senator who is Joe Biden's lackey," said Republican Party of Iowa Chairman Jeff Kaufmann. "While Grassley works for Iowa, Franken works for Biden - it's that simple. We need Republican majorities in Congress so we can put an end to the madness in Washington."