His ignorant comments are a slap in the face to Iowa farmers who have to be macroeconomists, business owners, and mechanics

DES MOINES -- In a video that resurfaced over the weekend, former New York Mayor Mike Bloomberg belittled and insulted farmers, claiming that he could “teach anyone how to be a farmer,” but the skills needed in the information economy are much more complicated because you have to be able to “think and analyze.”

WATCH: Bloomberg, who has probably never stepped foot on a farm, says farming is easy 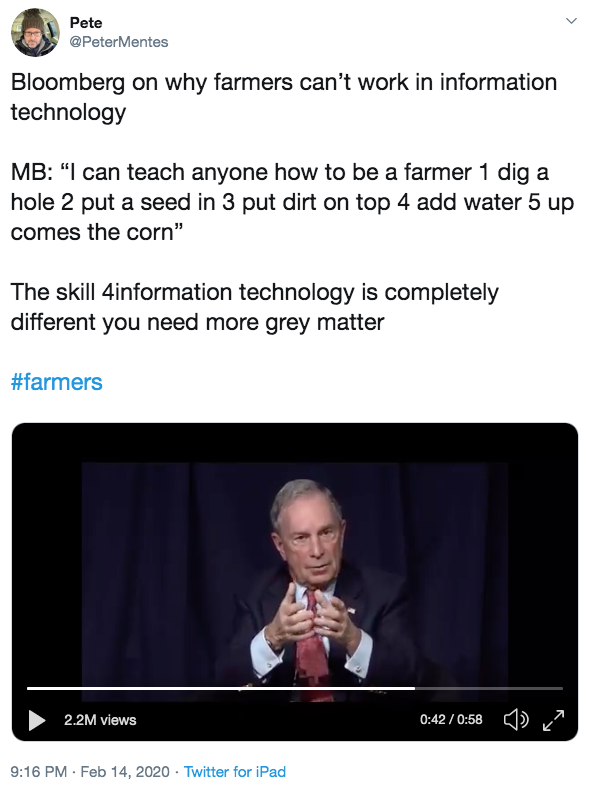 Perhaps if Bloomberg wouldn’t have skipped campaigning Iowa, he would know that farmers also have to “think and analyze.” In fact, a majority of farmers now use some form of technology to increase efficiency and productivity, reduce ground and surface water pollutants, and improve overall product quality.

His ignorant comments are a slap in the face to Iowa farmers who have to be macroeconomists, business owners, and mechanics, among many other things. Yet Iowa Democrats have been completely silent in the wake of these comments, perpetuating their struggle to win over rural voters. It’s clear Democrats don’t stick up for farmers because they don’t care to understand what goes into this essential line of work.

Meanwhile, President Trump has a record-high approval rating among farmers, at 83 percent, thanks to his record of getting results. From the USMCA to the Phase One China trade deal, the president is keeping his promises and negotiating free and fair trade deals to bolster exports and grow our ag economy.

“Bloomberg obviously hasn't kicked off his wingtip shoes and been on a farm lately,” said Jeff Kaufmann, Chairman of the Republican Party of Iowa. “Americans will never support a smug elitist who trashes the men and women who feed the world. Iowa Democrats should immediately call on Bloomberg to apologize for his insulting comments.”