Brenna Bird, the Republican candidate for Iowa Attorney General, released a new ad today hitting Tom Miller for not confining a sexually violent predator after their prison sentence - allowing the predator to re-offend. 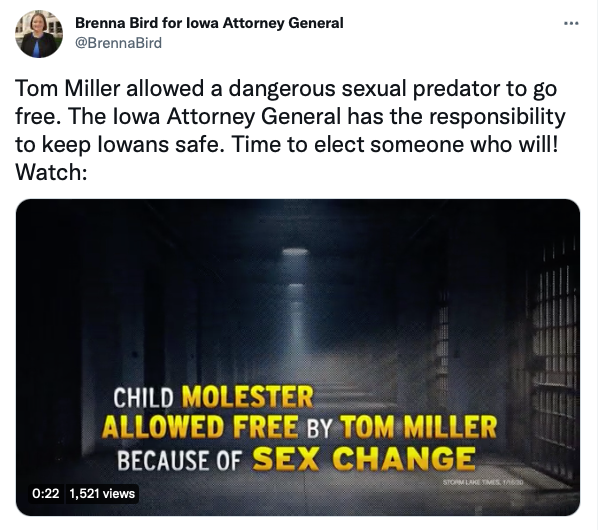 In 2019, Joseph Smith molested 15 children in Louisiana and Iowa. At the time, Miller's office stated that Smith was a, "sexually violent predator and has a high chance of reoffending," and a trial was scheduled for March 2020.

Smith then received treatment for gender reassignment and started going by Josie.

Miller's office then reevaluated Smith in light of their hormonal changes and determined Smith's lowered testosterone levels as reason to not confine Smith after their prison sentence.

Miller's office then motioned to dismiss its own case to confine Smith, who went on to commit criminal acts of child pornography in 2021 and 2022.

"We need to end the wokeness in our Attorney General's office. It leads to an unsafe Iowa," said Republican Party of Iowa Chairman Jeff Kaufmann. "We can no longer afford Tom Miller as our Attorney General. He let woke ideology lead his office and let a child predator out early. That's completely unacceptable."