This morning, it was announced that inflation hit a record-high 8.6 percent year-over-year in May. Remarkably, June 10th marks one year since Cindy Axne began dismissing Iowans' inflation worries. In an interview last year, Axne said, "We’re not even remotely close to a point to say that we’re at rising inflation."

Axne knows her votes in D.C. have caused this mess, and she's doing anything she can to downplay the situation. The news of rising inflation comes just days after Axne claimed to be getting inflation "under control." Obviously, that's not the case. Despite her spin, prices are rising and Iowans are struggling. Just look at how much prices have gone up over the past year: 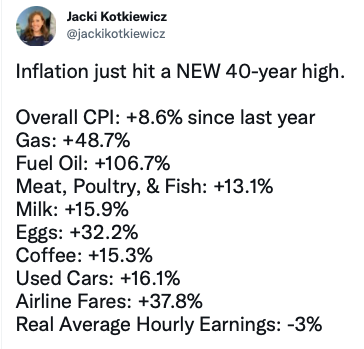 "Cindy Axne and Joe Biden are to blame for the immense economic hardship Iowans are facing today," said Republican Party of Iowa Chairman Jeff Kaufmann. "Iowans are sick of hearing Axne's excuses and denials. She's spent the last year dismissing inflation worries, but now she is saying she's getting it under control? She's completely out of touch and it's insulting to Iowans. It's time for a change and that's Zach Nunn."