Yesterday, an Iowa Judge ruled that Abby Finkenauer did not meet ballot requirements and will not appear on the primary ballot in June. Throwing Iowa Democrats into disarray. In an attempt to cover up their campaign failures, Iowa Democrats have resorted to questioning the integrity of our election system. 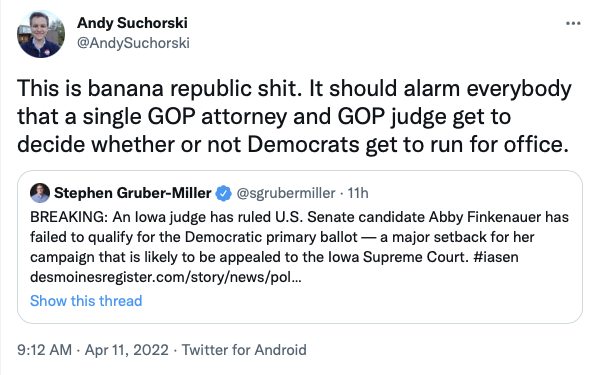 Even liberal "journalists" harped on how the judiciary is "interfering in free elections:"

"We have known for a long time that Iowa Democrats don't value election integrity, but now they are showing they believe they are above the law," said Republican Party of Iowa Communications Director Kollin Crompton. "For people who have spent a whole year lecturing others on how words are violence and dangerous rhetoric can be, attacking our judicial system in an attempt to cover up for campaign failures is pretty rich."