In a tweet sent this morning, Phillips says, "Losing a House election by six votes is painful for Democrats. But overturning it in the House would be even more painful for America. Just because a majority can, does not mean a majority should." 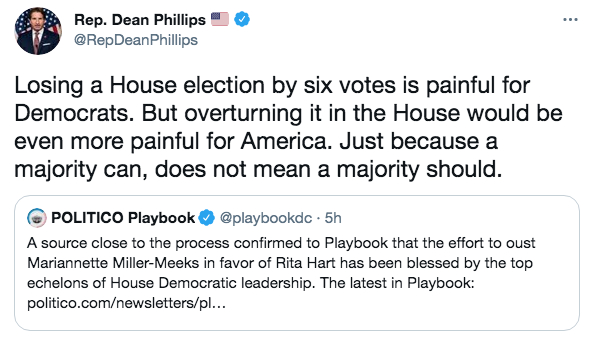 While her colleagues are willing to stand up to Pelosi and call out this desperate attempt to pad their already slim majority, Iowa's lone federal Democrat, Cindy Axne, has been completely silent on the issue.

"Cindy Axne's silence is deafening - she is complicit in Nancy Pelosi's attempt to overturn our state's certified election results," said Republican Party of Iowa Chairman Jeff Kaufmann. "A Democrat from Minnesota can acknowledge that what Pelosi is doing is wrong and yet Axne continues to allow Pelosi to disenfranchise Iowa voters."