On Friday, Mike Franken tweeted some harsh words for Iowans that disagree with him - calling them "unknowing accomplices to the treasonous," and calling for those Iowans to be confronted:

Franken has a long history of trashing those he disagrees with - both on and off Twitter.

Online, Franken has asserted that Iowans who disagree with him on the campaign trail are evil:

Ministers should be asked to police their churches:

All Republicans are "heretics:"

His ego is far bigger than any position in Congress:

And alluded to President Trump facing a military tribunal: 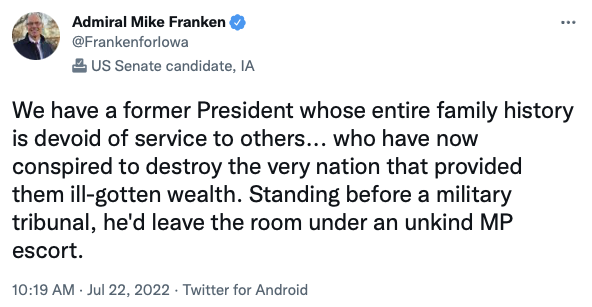 Offline, Franken even told supporters he has skipped towns on the campaign trail because someone was flying a "Let's Go Brandon" flag.

"Mike Franken's comments about Iowans tell you everything you need to know: he isn't going to beat a humble servant like Chuck Grassley," said Republican Party of Iowa Communications Director Kollin Crompton. "Franken continues to insult, demean and berate Iowans and they won’t stand for it."