‘As a county attorney, I proudly stand for the rule of law and will do the same as Iowa’s Attorney General,’ Bird said in a press release exclusively obtained by Fox News Digital. 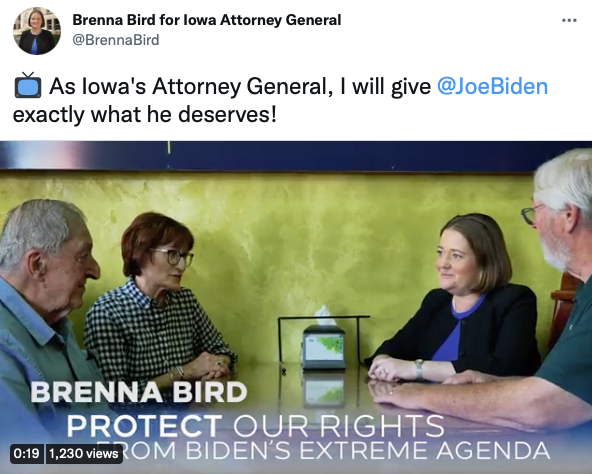 ‘The federal government is trampling on the Constitution and our freedoms, and it must stop. When I am elected Attorney General, I will protect Iowa from Biden’s radical policies,’ she continued.

The new ad — titled ‘Give ‘Em The Bird’ — highlighted Bird’s career as ‘the tough-as-nails prosecutor criminals and liberals fear most’ and how she will stand up to the Biden administration to guard Iowans’ liberties.

‘As Attorney General, Brenna Bird will protect Iowa from Biden’s extreme agenda’" the ad said as Iowans encouraged others to give Biden and liberals ‘the Bird.’

‘Bird will defend the rule of law and fight Biden’s immigration disaster,’ the ad said. ‘Brenna Bird will stand with law enforcement and always back the blue."’

‘I’m Brenna Bird, and I’ll give Joe Biden exactly what he deserves,’ Bird said at the end of the ad.

Bird’s ad will run across Iowa in multiple media markets following an injection of $1 million to her campaign by the Republican Attorneys General Association.