Wednesday, April 29, 2020
Iowans are starting to notice Theresa Greenfield would rather hold virtual fundraisers with Californians than participate in candidate forums, where she might have to actually answer a question.

Over the weekend, the five Democrats running in the primary for Iowa’s US Senate seat joined Southwest Iowa Democrats on Sunday for a virtual forum on rural issues. At the conclusion of the forum, the candidates – Michael Franken, Kimberly Graham, Theresa Greenfield, Eddie Mauro, and Cal Woods – were encouraged by the organizers to host their own “Ask Me Anything” Facebook event on their own pages. The event was a way to give voters an opportunity to ask the candidates questions.

The Southwest Iowa Democrats shared the links to the “Ask Me Anything” event for Cal Woods, Kimberly Graham, Michael Franken, and Eddie Mauro. But, when it came to Theresa Greenfield, one of the organizers, Iowa Democrats Adams County chair Jackie Cordon, said they were informed that Greenfield “chose not to participate” in answering Iowans’ questions.  The absence did not go unnoticed by voters. 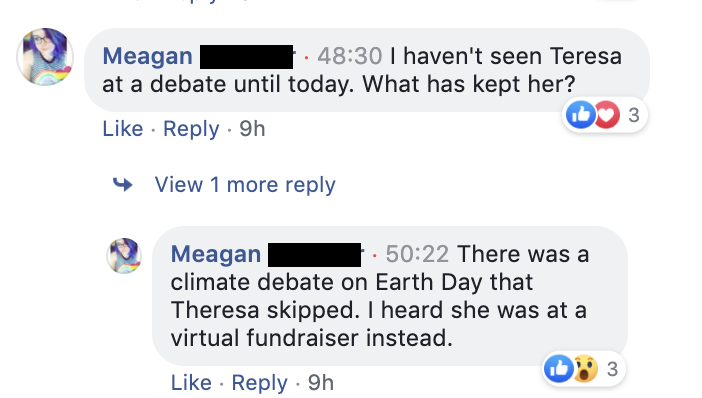 This wasn’t the only virtual event Greenfield has chosen to skip out on. Just last week, Greenfield missed a climate forum with the other four candidates, and Iowans again took note.

As one Iowan notes, it appears Greenfield has been avoiding public events and instead focuses on virtual fundraisers with Californians.

The Iowa Democratic Party spokesperson Jeremy Busch and Greenfield campaign did not respond to the Iowa Field Report’s request for comment.