Tensions are rising in the Democratic primary for Senate in Iowa.

Tensions are rising in the Democratic primary for Senate in Iowa.

Despite Chuck Schumer and the DSCC pushing that they “don't need a primary” in the Iowa Senate race, Iowa Progressives are making it clear that they will not allow Washington elites to determine the Democratic Senate Primary.

Last week, in an endorsement of far-left candidate Kimberly Graham, Linn County Supervisor Stacey Walker noted, in part: “I was pleased to see Eddie Mauro endorse a public option for health insurance and list some solid plans around addressing the climate crisis, among other issues. I’ve read a bit about Vice Admiral Mike Franken, and it appears as if he will bring a new and necessary perspective to the race as well. However, when it came to the front-runner, outside of the bio, the only information I could access from Theresa Greenfield’s campaign website was instructions on how to donate money.”

It’s Schumer and national Democrats’ worst nightmare as Kimberley Graham, Michael Franken and Eddie Mauro have shown no signs of backing down, and neither will Iowa Progressives.

In case you missed some of the notable stories…

National Journal: Walker Backs Graham, Slams Greenfield
Walker, after praising Graham’s clearly defined plans: “However, when it came to the front-runner, outside of the bio, the only other information I could access from” 2018 IA-03 candidate Theresa Greenfield’s (D) “website was instructions on how to donate money.”

Cedar Rapids Gazette: Linn County Supervisor Stacey Walker endorses Kimberly Graham for Senate
Walker had previously hinted at his support for Graham as well as his displeasure with what he sees as interference from Democratic Party officials and organizations in Iowa’s four-way race for the party’s nomination.

Little Village: Linn County Supervisor Stacey Walker endorses Kimberly Graham for U.S. Senate
“In a political season where candidates are rewarded for having a plan, Kimberly Graham is unmatched in this race.” Walker contrasted Graham’s approach with that Greenfield’s approach. According to Walker, “the only information I could access from Theresa Greenfield’s campaign website [aside from a biography of the candidate] was instructions on how to donate money.” 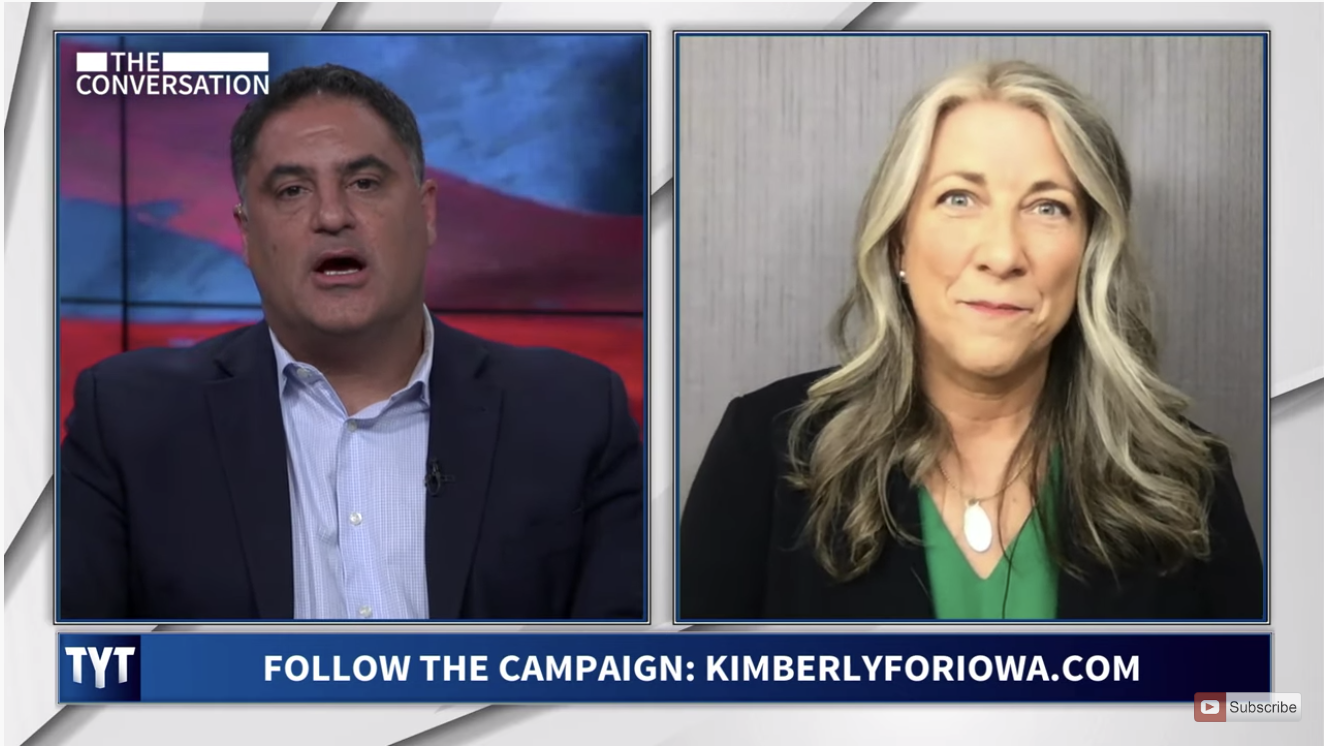 Uygur: “Oh look at that a business owner just like predicted. Interesting. Alright so people have to realize that corruption isn’t just in the Republican party. The Democratic party will systematically go and pick the richest people in the race. Every time. So Kimberly you see how you screwed up here by not being born as wealthy?”

Graham: “We found out that one of our opponents in this race did take a substantial donation. She claims she’s not taking any corporate pac money and I have no reason to doubt that but in looking through the FEC reports, we saw a sizable donation from a partner in a lobbying firm for insurance, tobacco and pharmaceuticals, I believe it was.”

Daily Nonpareil: Franken makes campaign stop in Bluffs in race to challenge Ernst
In an interview with “Starting Line” in June, Franken acknowledged Greenfield got a big head start, but he was confident about his ability to beat Ernst in 2020. “Do you want someone who can start on Day 1 or do you want someone who will be beginning a six-year learning curve?” Franken said Monday during an interview in Council Bluffs. “I’m confident her head is in the right place, but I’ve had 11 jobs in D.C. during my nearly 40-year career with the Navy,” he said. “I’ve managed 6,700 people, and I’ve been in charge of a $150 million budget.”