Theresa Greenfield, running for US Senate, accepted $2500, nearly the maximum contribution allowed by law, from New York lawyer Rodgin Cohen. Cohen was the lawyer that helped Harvey Weinstein keep his job despite a history of sexual harassment and hush money settlements during contract negotiations at the Weinstein Company. 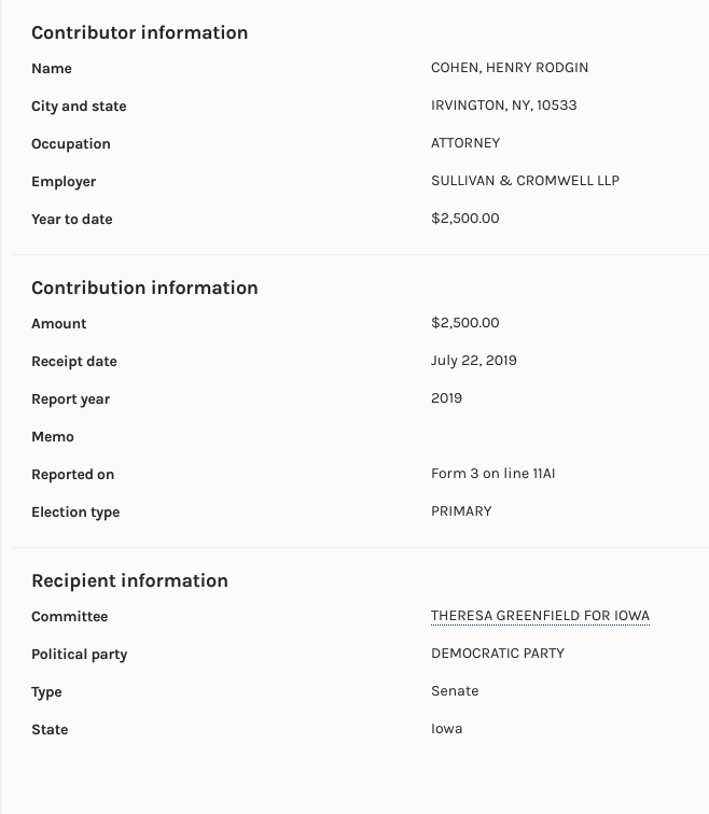 In 2015, Harvey Weinstein’s contract was up for negotiation. His attorney, a man by the name of David Boies, was working to renew that contract amid a deluge of accusations of misconduct. The board was anxious that Weinstein had engaged in a pattern of misconduct. Boies hired Rodgin Cohen to review Harvey’s personnel file since Harvey refused to open it to the board directly. Cohen told the board to go ahead and offer him a new contract because Harvey was clean. However, Cohen failed to inform the board members of alleged sexual harassment the previous year by a woman named Emily Nestor. Even though the incident was detailed in his personnel file, it came to light later that Cohen may have other motives in protecting Weinstein, as his son at the time worked for the Weinstein company.

In 2017 The New York Times wrote about Cohen’s role:

After the episode, Mr. Maerov said, Mr. Weinstein refused to let the board review his personnel file directly. Instead, it was examined by an outside lawyer, H. Rodgin Cohen, who assured the board in a September 2015 letter that it was legally safe to retain Mr. Weinstein because there were no unresolved complaints or threats of litigation against him, according to two people who saw the letter and spoke on the condition of anonymity.

In the file, Mr. Cohen came across a single sexual harassment allegation, from 2014, involving a former temporary employee, Emily Nestor, according to a person familiar with his review.

Ms. Nestor was new to the job at the company’s Los Angeles office when Mr. Weinstein invited her to breakfast at the Peninsula Beverly Hills and made her an offer: If she accepted his sexual advances, he would boost her career, according to accounts, viewed by The Times, that she provided to colleagues who passed them along to executives. She declined the offer and never intended to complain to human resources personnel, internal records show.

It is unclear whether the board was told of her allegation — by the executives or by Mr. Cohen, who declined to comment for this article. Mr. Maerov said, ‘Her name came up in 2015, but I don’t remember who brought it up.’

Mr. Cohen’s letter to the board did not describe the contents of Mr. Weinstein’s file, nor did it address whether Mr. Weinstein had entered into private settlements with women who complained of misconduct

Aaron Britt, Spokesman of the Republican party of Iowa says, “It is outrageous that Theresa Greenfield would willingly accept thousands of dollars from a lawyer with ties to a sexual predator and convicted rapist. It certainly speaks to how desperate her campaign is for cash, but the donation should be returned immediately. If not, she owes Iowans answers.”