There has been plenty of partisan spin from Joe Biden and his allies on the baby formula shortage facing America's parents.

First, the only reason America's parents are facing this massive shortage is because of the Biden Administration's lack of response. Here's the timeline:

Even MSNBC's Willie Geist admitted, "This has been many months in the making."

Second, the Infant Formula Supplemental Appropriations Act was a complete political stunt. This bill did nothing to help get more baby formula in the hands of parents. To be exact, it gave $28 million to FDA employees' salaries. Nowhere does it mention that this money is dependent on any actions of the FDA to create more or import more baby formula.

Simply put, the very people who caused this shortage do not deserve a raise.

Lastly, Iowa Republicans have been on the front lines of this issue. Rep. Randy Feenstra introduced a bill, "to establish and communicate to Congress clear standards by which it domestically regulates infant formula." Rep. Ashley Hinson introduced the "Babies Need More Formula Now Act" with her colleagues focusing on, "more oversight and accountability at the Food and Drug Administration (FDA) to ensure the Biden administration is doing its job, acting quickly to maintain a healthy and safe supply of formula, and not wasting resources." Senator Grassley sent a letter to the FDA demanding answers as early as May 10th.

Through all of this, some "journalist" seem to forget that Wahsington is under complete Democrat control. 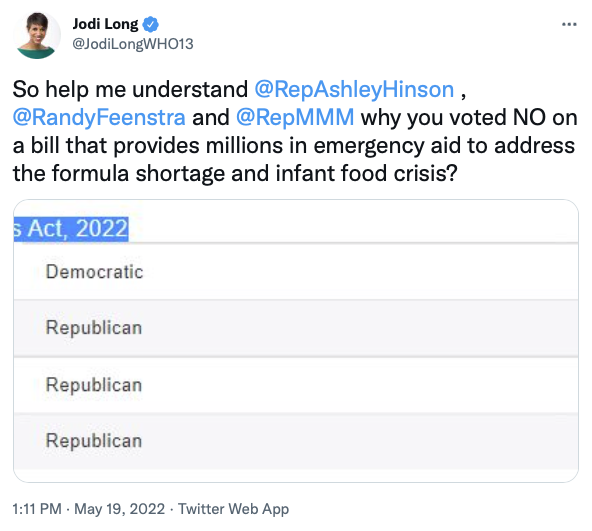 "This is just another major failure of the Biden Adminsitration. Its the type of inaction that led to Afhganistan, record high inflation, and skyrocketing gas prices," said Republican Party of Iowa Communications Director Kollin Crompton. "It's a shame that only Republicans are willing to hold those responsible accountable for their actions. Everyone knows Democrats are in control of Washington."