Yesterday the DCCC announced their 'Districts in Play' for 2022. This list included Iowa's First and Second Congressional District. The DCCC did not see the incredibly successful fundraising coming from Congresswomen Ashley Hinson and Mariannette Miller-Meeks.

Monday, Iowa Field Report broke that Congresswoman Ashley Hinson will report raising over $570,000 with more than $400,000 cash on hand in the first quarter.

This haul breaks fundraising records for an Iowa incumbent in the first quarter, and puts Hinson in a strong position to fend off a Democrat challenger in 2022

Yesterday, it was announced that Mariannette Miller-Meeks raised over $531,000 with more than $770,000 cash on hand in the first quarter. 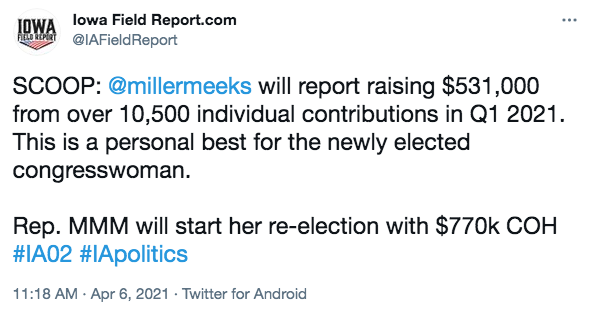 "These numbers show the strength, enthusiasm and support of GOP incumbents right now," said Republican Party of Iowa Communications Director Kollin Crompton. "While the Biden Administration is failing to keep our Southern border secure and paying off their debts to the progressive wing of the Democrat party, Republicans are creating a solid foundation for 2022. We have the opportunity to take back the House and the Senate and put this country back on track."