Greenfield is set to join Cunningham and other out-of-state liberals for a fundraiser this Sunday:

DES MOINES, Iowa -- Failed Des Moines real estate executive Theresa Greenfield is set to participate in another fundraiser with Cal Cunningham, a scandal-ridden Senate Democratic candidate in North Carolina who has been caught engaging in at least one affair. He’s now under investigation by the U.S. Army Reserve after he admitted to exchanging suggestive text messages with the wife of a combat veteran.

According to an ActBlue link, Greenfield is set to join Cunningham and other out-of-state liberals for a fundraiser this Sunday: 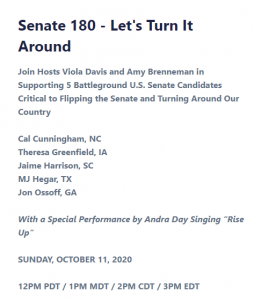 Greenfield often complains that there is “too much” money in politics, yet she is clearly still eager to hold fundraisers with out-of-state liberals and disgraced candidate Cal Cunningham, who has admitted to at least one extramarital relationship.

“If Theresa Greenfield refuses to drop out of this fundraiser, it will be even more clear to Iowans that she cares more about money than running a campaign that reflects the values and morals Iowans hold,” said Aaron Britt, Communications Director for the Republican Party of Iowa. “Greenfield should immediately return the half a million dollars she has raised with Cunningham and cancel this upcoming fundraiser. Anything less will be a further proof that Iowans can’t trust Theresa due to her complete lack of judgement.”